Transcripts may be inaccurate due to software 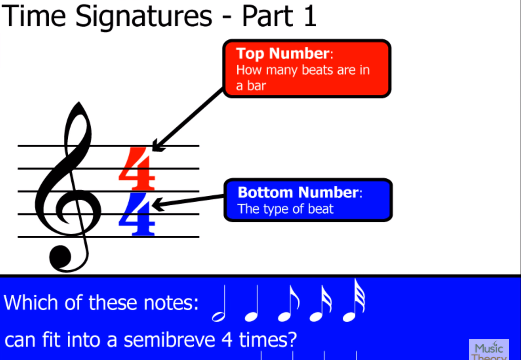 0:05
explaining what time signatures are

0:06
and how they work. In this video, part one I’ll be explaining the more common types of time signatures such as those listed here and I’ll be demonstrating how to calculate missing time signatures for a passage of music. It’s really important that you understand a note names and their values before looking at this video. If you’re not sure of the names of notes, have a look at my video note names and their values.

0:31
Firstly, it’s important to understand the meaning of a time signature.

0:35
So he’s a time signature which most people have seen before. For for what does it tell us? Well, the top number tells us how many beats are in a bar. In this case, there are four beats in a bar.

0:52
technically, you can have any number you like at the top as long as it’s a whole number and not a fraction like two and a half. But

1:00
It’s the bottom number that seems to cause most confusion. The bottom at number tells us the type of beat by this I mean do we can’t in crotchets minimums quavers or something else in this example, the bottom number is for this effectively means which note and here are a few can fit into a semi brief four times four times because there’s a four at the bottom of the time signature, the answer is a crotch it this one as it has a value of one and can fit into a semi brief four times. So we can say that the full meaning of for for is for crotch it beats per bar, the for being the number of beats the crotch it being the type of beat.

2:23
well that represents eight minutes as two minutes each worth to fit into a semi brief which has a value of four

2:31
so the full explanation of this time signature is 3 million beats per bar.

2:37
Hopefully by now you’re getting the hang of what time signatures represents. Let’s look at some fairly common time signatures for for this is a very common time signature so much so it is often abbreviated to this symbol The sea is short for common time. Now I’ve already said that this time signature means that there are four crotch it beats in a bar. This is true but clearly doesn’t mean that we can only write for projects in each bar of course not we can write anything we wish in the bar as long as the total value of the beat is exactly for no more and no less. So this is acceptable. So is this the for semi quaver is equal beat one, this crotch it is beat to the two quavers equal one beat and the final crusher equals one beats are there are four beats in this bar, this bar is also acceptable for quavers equal to the fine minimum also equals to two plus two equals four beats, we are allowed in this bar.

3:39
Everybody must equal the number of beats in the bar. So here’s three eight. Remember, this means three quaver beats in each bar,

3:48
it doesn’t mean you can only have three quavers in each bar, you could have six semi quaver if you wanted or indeed almost any type of beat. As long as it doesn’t exceed three quavers I mentioned a few minutes ago that this symbol means for for his time to nature that looks very similar but means something else notice that there is a line through the middle as if the see has been cutting to what is often called

4:14
cut common time and it represents

4:16
to to so firstly remember this is common time n equals four for this is cut time or cut common time and represents to to now a lot of students asked me why have to to when you can just have for for as they both have for crotch it beats in them. My answer is simply know although for for has for crush. It beats to two dozen not it has too many beats.

4:45
Okay, two minutes can be split into two crotch it beats each. So you may ask why have to to at all. Well, there are quite a few reasons for this. But the most common reason is to do the tempo or the pulse of the music for example to to is quite commonly used for faster music for for is generally used for slower, not slow but slow music in for just don’t worry too much about this. If you’re writing a piece of music, it doesn’t really matter whether you are to us to two or four for what’s important is that you understand that for for has for crush it beats per bar and to to has too many beats per bar. This does cause a problem if you’re sitting a music theory exam and asked what time signature could be for this piece of music. without really knowing how fast the music is to be played. It’s pretty impossible to know for certain therefore the answer could be for four or two to you’d get a mark for either the same dilemma appears in many other time signatures such as three, four or three, eight, perhaps you want to compose a piece of music in three but you’re not sure whether to use three four or three, eight, they both have three beats three, four is in crush it beats was three eight is in quite beats. Generally three, eight is used for faster rhythms. But there’s no real hard and fast rule. So don’t worry too much about this. I will have a look a little more about this in my videos about composition.

6:05
Now before we tackle some exam type questions,

6:10
there’s something very important I need to point out here. Here’s a full bar of quavers into four and three eight notice how into for the quavers are in groups of two, whereas in three, eight, they are in a group of three.

6:26
I talked about the grouping of notes in my video about beaming. But as a rule of thumb for the moment

6:32
quavers in a time signature with an eight at the bottom our group together in threes do remember this rule, okay, if you’re going to be sitting a music theory exam, you often come across questions whereby you’ll be given a melody or a rhythm and you have to write down what the time signature is. Let’s try a few examples. Now the first thing to notice is that the quavers are grouped in twos

6:56
this immediately means we can ignore any time signature with a eight at the bottom. If there were two at the bottom of our time teacher would be counting in minimums as the two represents minimum

7:10
all the notes values together, half plus half plus one equals two, one minute equals two. Therefore, as there is one

7:32
ever played a piece of music in one too. So let’s try again. Let’s try counting in crotchets. So uh, for the bottom, the two quavers each worth half equal one crush it and there’s another question here so there are two crotchets in this bar. As there are two we had to to to the TOEFL time signature, so to four which is a much more common time signature is the answer. How about this one there’s no quavers in once. We can’t dismiss time signatures with an eight at the bottom just yet.

8:04
So let’s look at the options. If there was an eight at the bottom meaning quaver beats we have to count up all of the quavers in the bar.

9:20
Well, the answer is for to now there are lots of reasons for this, some of which are quite complex. I’ll discuss this further in part three, but the main feel or pulse of the beat is clearly into due to the abundance of minutes it’s also easy to counter for rather than town to count to eight as an eight for in every bar besides why right eight for when like fractions, it’s easier to express as for to

9:45
has for 16 eight. Well, this is actually another very rare time signature. If you’re studying music theory with the associated board, you’ll never get asked a question about 16 eight. It’s what’s called an irregular time signature,

10:10
Remember I said that when the time signature has an eight at the bottom,

10:13
the waves are grouped into threes, we can’t group 16 quavers into equal groups of threes that have to be two groups of two. This makes it an irregular time signature for to however, is a very common time signature and emphasizes the minimum beats

10:31
quite a tricky question this one in this example,

10:34
there are two bars and the second bar has a rest in it. Always make sure that you can’t any rest in about when calculating a time signature rest are just as important as the notes themselves

10:46
to calculate the time signature. Let’s start with counting in crotchets a. For at the bottom of the time teacher, well, this wouldn’t work as we end up with one and a half in each bar. Remember, you can only have whole numbers at the top of time signature,

11:06
But we can count in quavers an eight at the bottom of our time signature

11:25
the quatre beats, we’ve calculated that there are three quaver beats per bar, so we can add in three as the top number two, our time signature.

12:00
eight at the bottom we’re looking to group are quavers in groups of threes. Now in eight, eight, it’s not possible to group all of your quavers equal into groups of threes that have to be groups of tues so it makes it and irregular time signature.

12:16
So we get to two or four four. Well, it could be either you’d get a mark if you put for four or two to in fact, you’d also get a mark. If you chose to use the symbols for common time or cut common time. There is simply no way we can tell whether the composer wrote this in for four or two to so just be aware that sometimes

12:37
and only sometimes then maybe a choice of answers.

12:40
Now I could keep fighting examples like those we’ve just tackled. But as there is an unlimited amount of possibilities, I will leave it there. The key thing to do is to count and explore each time signature option in time you’ll get quick at this and you’ll be able to spot missing time signatures very quickly. In the next video, I’ve explained the difference between simple and compound time signatures. In the meantime,