What is a Musical Interval

What is a Musical Interval

0:00
So now we’re going to have a look at pitch in little bit more detail. And more specifically asked the question can we find a good way for talking about how far apart in terms of pitch to notes are. So imagine we had this note here, it sounds like this.

0:23
Now, whether we played them separately, 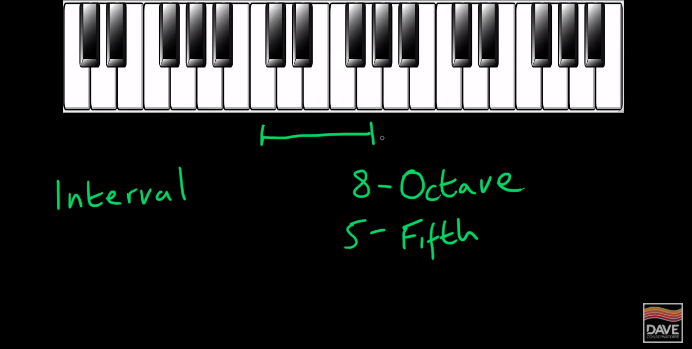 1:10
you remember that when we just started learning about pitch, we said that an octave is quite an important relationship between two notes, they have the same letter lane, that’s how important is that we almost kind of use it as a basic measurement of pitch. And some it’s interesting about octaves, is that as we move them around,

1:26
and make sure the notes of the same distance apart in terms of semi tones, or in terms of distance on our piano keyboard, you’ll find that the effect is the same, yes, they go up and down to as the general pitch. But the relationship kind of sounds similar.

1:41
these two notes kind of sound like two flavors of the same thing. And I’d say the same was true of these two notes, they have that same relationship. And that’s what we find with intervals in general, is that no matter where we move them up and down in terms of pitch, or in terms of our piano keyboard, the sound that we’re going to hear and the relationship they have to one another is actually very similar sounding really important part of developing our ears as musicians, is to become really good at naming. And even identifying with our ears, different intervals, because it gives us a good understanding of how melodies are put together, and even how more complex musical structures work. So let’s get started with exploring some more of these interval relationships between the pairs of notes, we’ve already got octave. And that has a very distinctive sound. Hopefully, that’s becoming pretty familiar. And I’m going to add another one into the mix. And that is a fifth,

2:36
you might have noticed that both of these terms, octave, and fifth relate to numbers in some way, you know, the octopus has eight legs. And equally fifth means the, you know, the fifth thing in a sequence, I suppose. And it’s not a coincidence that these names do relate to numbers, because these numbers are actually the number of number of keys that we have to count through all the number of Latin name that we have to count through to go from the lower notes in that interval to the upper notes. Now, the thing about intervals, which might be different than some of the other things we’ve done so far, is that when we’re looking at two notes on we’re counting from one to the other, we always count the top and the bottom notes and as part of our interval. So as a demonstration, I’m going to play you an octave is a bottom see here’s a Topsy and I’m going to count the numbers of letter names or notes white notes that we have to go through to go from that bottom seeds the top season. Here we go

3:42
eight notes counting the bottom and top between our Losi and high C. We call that an octave.

4:05
remembering we count the bottom and top notes in our five notes. Here is our interval of a fifth and here it is C and G. So just have a quick listen to the fifth. It does sound quite different to an octave. I feel it sounds a bit harsher. And a bit Berra and that octave octaves to me sound very clear and clean as an octave his office you can hear some overtones. If you’re very very good at listening deeply between the notes you’ll hear other sounds as well. And that’s what gives the the fifth a bit of a bear character. Just like the octave the way we could move the octave around. As long as we kept the same number of notes

4:43
in between the top and the bottom. We can do the same thing with a fifth. So here’s a G and remember counting the bottom and top notes 12345